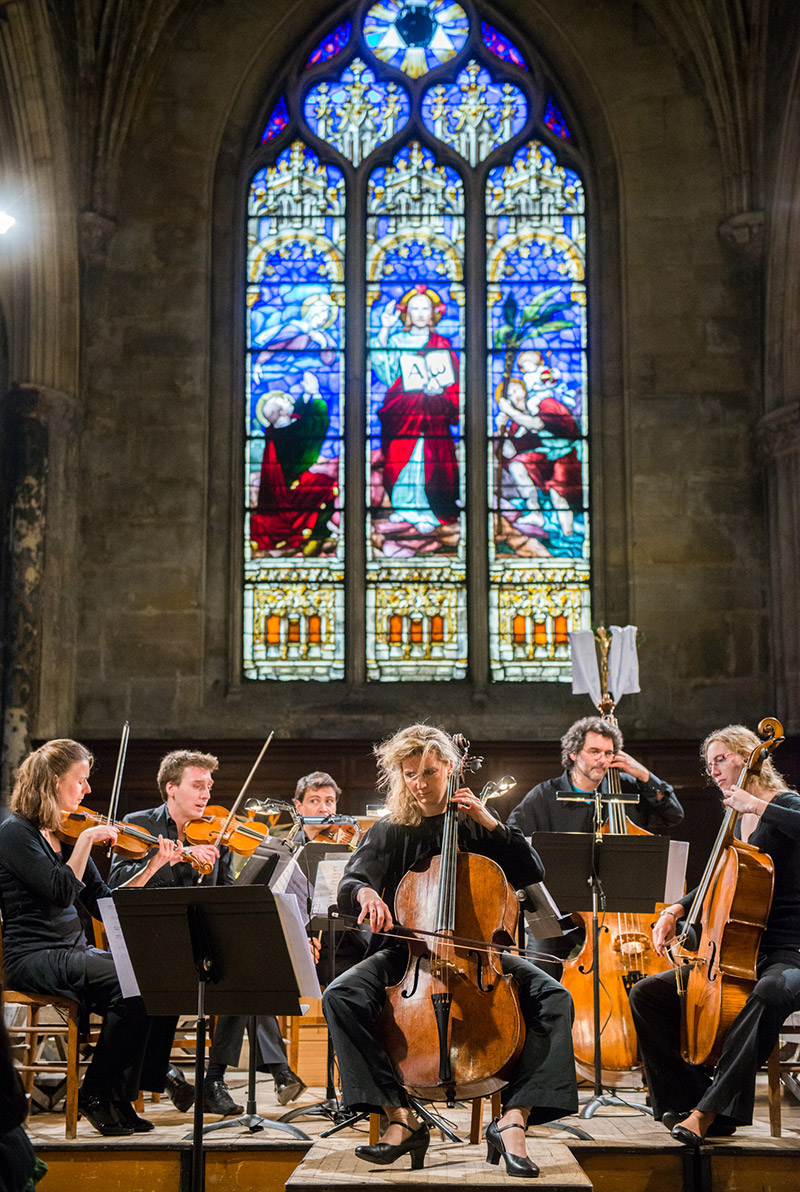 Concertos for cello and for harpsichord, symphonies for strings, sonatas

Carl Philipp Emanuel inherited his father’s knowledge, being truly proficient in the Baroque music although overtaken by the movement of Empfindsamkeit. He has magnified the string orchestra and has never stopped innovating. He’s created a new sound texture, which reflects his own sensitive expression full of virtuosity and lyricism.
Following the success of its first disc for the Aparté label, in April 2016 Pulcinella released a new disc devoted to the most turbulent of Bach’s sons. Just like the first CPE Bach album, awarded a ‘Diapason d’or of the Year 2014’, this second volume received the highest praise from the international press (Diapason d’Or, ‘Choc de Classica’, ffff Télérama, Toccata ‘Disc of the Month’).

“I may without conceit say that this is one of my greatest masterpieces!”. Thus spoke the Bach family’s most illustrious son of his Resurrection and Ascenscion of Jeus, arguably his most ambitious oratorio, a luminous and exultant work. The great Mozart himself, who considered Carl Philipp a true genius of the pre-classical era, to be “the father” of an entire generation of usicians, chose to conduct none other than the Auferstehung in 1788 in Vienna, the year of Bach’s death.
For this project, Pulcinella joins forces with one of the most exciting rising stars among European vocals choirs: Arsys Bourgogne, conducted by the young and brilliant Mihaly Zeke.

Haydn : Between shadow and light

Haydn – Between shadow and light

Haydn is our guide for this exploration of the Classical aesthetic and philosophy of the Enlightenment.

Constructed like an initiatory journey, the programme begins with Haydn’s dazzling Concerto in C major, composed in 1762, featuring hair-raising virtuosity for the solo cello.

Then it is time for the recitation of the seven last words of Christ. Written in 1786 and revised many times, the original version, played here by a string orchestra, embodies this dizzying, demanding immersion in the Shadows of the Crucifixion up to the concluding Earthquake.

Written in 1707 on a libretto by Cardinal Pamphili, poet and member of the Accademia dell’Arcadia, this cantata in the form of an opera seria relates the loves of Tirsis and Cloris. Here, the young Handel displays virtuosic vocal and instrumental writing and entrusts solo roles to the violin, oboe, flute or cello. The adventures of these two shepherds allows for staging Antiquity and giving a new interpretation of the myth of Orpheus in the underworld. But this time, it is the shepherdess Cloris who goes down to the underworld to join her beloved Tirsis. The ingrate rejects her once again before she snatches him, in spite of himself, from the banks of the Styx.

Economy of means, absolute effectiveness that marvellously conveys the confusion, pain and fury that takes hold of our two outraged heroines. Lucretia, raped, dishonoured, and alone, finally casts herself into hell to achieve vengeance, while Armida the magician, despite her powers, is unable to hold Rinaldo in her clutches. Bach himself admired this score to the point of making a copy of it.

All the passionate impulses are expressed in these two chamber operas in a summary of Baroque dramaturgy, inspired by a singer with whom the young Handel was infatuated.

This program is under the double influence of variation and dance. Variations on the madness of Spain, elegance and virtuosity of the Canarios, frenzy of the Jàcaras, sensuality curvy of the Fandangos, as many scholar pieces that mingle the Castilian, African, Amerindian and Arab-Andalusian cultures.
Arsys Bourgogne, conducted by the young and brilliant Mihaly Zeke.

Fervour and virtuosity in Venice

Fervour and virtuosity in Venice

After having explored the secular and sacred Neapolitan music, we are currently working on vocal and instrumental pieces composed by Vivaldi for the residents of the Ospedale de la Pietà a subject of fascination to all visitors of the Serenissima, from Charles Burney to Jean-Jacques Rousseau.
The Venice Ospedale Della Pietà was supposed to provide assistance to illegitimate daughters and assure access to general education as well as to a high-quality musical education.
Every night, the young girls ‘choir would accompany the litanies to the Blessed Virgin, the prayers commissioned by the faithful as well as the masses and vespers of Sundays.
The young virtuosos, very ably advised by professionals of each instruments, had an equal voice and would sing with a tenor voice transposed into their musical mood, thus to achieve a perfect balance of the vocal ensemble. We are building our Venetian program with these versions.

From Eccles to Purcell (grounds by Purcell, anonymous masques from 17th-century England)

From popular tunes to anonymous instrumental masques from the Elizabethan era, and from hypnotic instrumental grounds to the highly prized genre of ‘mad songs’, the English 17th century readily explored and staged the hallucinatory delirium of distraught lunatics.

Through the pieces by Henry Purcell and John Eccles, we shall set off, more precisely, in the steps of two characters who became inspirers of the collective English subconscious: Tom, portrayed by Shakespeare in King Lear, and his young sister, Bess of Bedlam, interned at the Bethlem Royal Hospital and who inspired the character of Ophelia.

In 2017, Pulcinella will continue its exploration of the Cantor’s work with the German version of Pergolesi’s Stabat Mater, inspired by Psalm 51 and published in 1745. This brilliant score, the young Neapolitan’s final work, composed two months before his death at 36, quickly became famous throughout Europe. In his parody, Bach enriched the orchestral texture in four parts, adding an independent viola part.

Here is what Gilles Cantagrel wrote in the booklet for the Bach Arias disc, released in 2013 : ‘Bach lived at the happy time when new instruments coexisted with the old. Amongst the latter, the violoncello piccolo enjoyed fleeting fame in the early 18th century. It is thought to have been a smaller instrument than the standard cello, endowed with a fifth string in the upper register, allowing for rapid movements in that register, with lightness and delicacy of sound. Regardless, the musician expressly mentions its use in nine of his known cantatas, in which the instrument emphasizes a timbre both warm and delicate, appropriate for the expression of indulgence or confident tenderness, for example, that of the Christian for the Good Shepherd.’